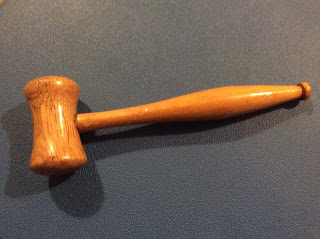 Returning to halls after Christmas, during our first year at university, my room mate and I discovered this wooden gavel inside the wardrobe.

The university had let out the residential halls over the holiday period to a conference and presumably one of the delegates had left the gavel there by mistake. (What sort of conference, and why the delegate was in possession of the wooden hammer, we never did find out.) We dutifully handed it in, but as no one came forward to claim it the gavel was returned to us to do with as we wished.

The difficulty was, my room mate and I both wanted to keep it as a souvenir. We considered tossing a coin, or perhaps playing Paper, Scissors, Stone to decide who would win custody. But eventually we decided on joint ownership, each of us taking a turn at being the custodian of the gavel. And so each time we meet (on average once a year, sometimes shorter but often a longer period) the gavel is ceremoniously handed over. It has become a motivating element in the 41 year story of our ongoing friendship.

The gavel has become our ‘MacGuffin’, our ‘weenie’, our thingamijig. In fiction, particularly in films, the MacGuffin is the word used to describe the mysterious artefact, the priceless jewel, the secret papers or whatever it is that the characters seek. The search for it is something that drives the plot forward.


Yesterday my journey took me back to our Alma Mater. Today I return victorious, having acquired control of the MacGuffin.