Panorama - a view from the Edge 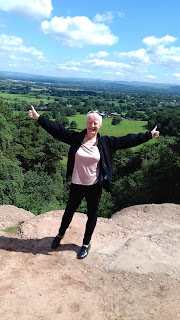 Day 3 of the journey - our heroine finds herself on the edge before being rescued by the Wizard.
Today I walked up Alderley Edge near Macclesfield, a large sandstone escarpment from which one can view the Cheshire plains below. Climbing up to the height was simple enough. The sun shone, visibility was good, a perfect photo opportunity.

There are several legends and folklore associated with Alderley Edge (some of which provided inspiration for Alan Garner’s books ‘The Weirdstone of Brisingamen’ and ‘The Moon of Gomrath’). Standing in the bright sunshine such myths felt fanciful.

But when I tried to find my way down again the path didn't seem so obvious. I wandered through the wood, following trails which at first glimpse looked familiar, but then realised I had not seen before. The sun went behind a cloud. Inside the wood the paths were overgrown and the farther in I walked, the darker it became. 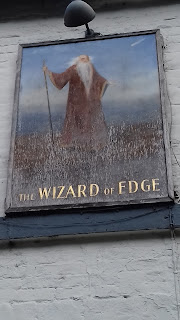 Surrounded by trees it didn't take long before I lost all sense of direction. Was I walking in circles? Had I been bewitched and led astray by the spirits of the wood?

Happily I was rescued from my wanderings when I chanced upon The Wizard of Edge - not Gandalf or Merlin, but rather the pub which bears the title!

And so, freshly provisioned, I continued on my journey.