Gate of the Year

The new year can be exciting, full of possibilities - successes, new discoveries, plans to be made. But it can be scary too. Who knows what problems lie before us? A poem I learned as a child comes to my mind each January. 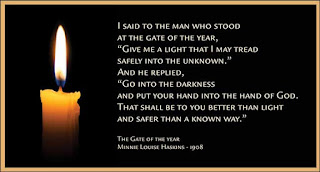 I love the imagery of a guiding hand being "better than light and safer than a known way". The poem was written by Minnie Louise Haskins who died in 1957. I wrote about her in my recent article which is published in The People's Friend Special 133. Minnie unwittingly became an overnight celebrity when King George VI quoted from her poem in his address to the Commonwealth in December 1939.

The words of the poem would have provided comfort to many in the early days of the Second World War. As you stand at the gate of 2017, I hope that, whatever your faith, you will find strength and courage to embrace everything that the new year has in store.

I wish you all a very Happy New Year.
Posted by Bea Charles at 17:09