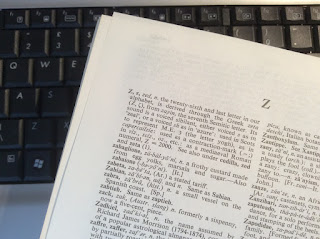 I began blogging in February 2015 and each of my posts has followed an alphabetical prompt. This is the second time I’ve been through the list. So I’ve completed 52 posts to date. Not quite one per week but close to it.

I like blogging. It’s an interesting discipline, forcing me to write even when I haven’t always felt like sitting at a keyboard. I suppose in that sense I write mainly for myself but I love it when others stop by and leave a comment. Thank you to those who take the time to read my posts.
I may not update this page quite so frequently in the near future. Real life sometimes gets in the way of the virtual world. I hope to return soon. In the meantime I shall catch some zzzz.
Posted by Bea Charles at 14:46